When the draw for the third round of the Welsh Cup was made there were a few tasty looking ties to choose from but the lure of the lowest ranked team left in the competition against Premier League opposition was, in the words of the late Robert Palmer, simply irresistible.

Ynysddu Welfare play in the Gwent County League (which sits at step 5 in the south of Wales) and today they were hosting one of Wales oldest clubs, Cefn Druids.

Indeed this was the first time a (step 5) Gwent County League club had ever reached the third round of the Welsh Cup.

The first football club founded in the village, Ynysddu Albion, were formed in 1905, 33 years after The Ancients of Cefn Druids. The club changed its name to Ynysddu Crusaders in 1915 before being disbanded in 1939 at the outbreak of the second world war.

After the war Ynysddu Welfare were created after the merger of two ‘wartime’ clubs, Ynysddu Celtic and Cwmfelinfach Rangers and the club joined the South Wales Amateur Football League. 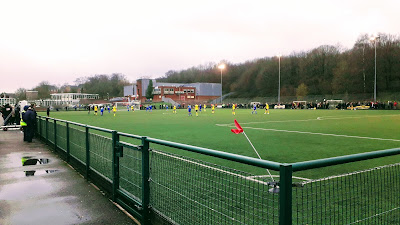 The day began with a train from North Wales to South Wales courtesy of the new Transport for Wales franchise. I thought Arriva were rubbish but all my experiences of this new company have so far been poor but today everything went smoothly and my mate and I were in Newport at the stated arrival time. Breakfast was taken at one of the local 'spoons (Queens Hotel) before calling into the simply wonderful Tiny Rebel tap for a couple of scoops.

The 151 bus went from the centre of town to the Pontllanfraith leisure centre where Ynysddu play their home games. There were plenty of other groundhoppers present in the ground, clearly they had the same thoughts as us!

Pontllanfraith is a couple of miles north of Ynysddu Village and is actually part of Blackwood (famously the home of the legendary Manic Street Preachers). The club set up base here in 2016 after a somewhat nomadic existence playing on various local grounds and pitches.

However recent events could see the club on move once again in the next 18 months. Caerphilly council have announced plans to close the Pontllanfraith leisure centre and bulldoze the site. There are objections to the plans and there is a campaign to try and save the facility. Whether this is successful remains to be seen. By all accounts Ynysddu will be based here until at least the end of 2019/20 season. 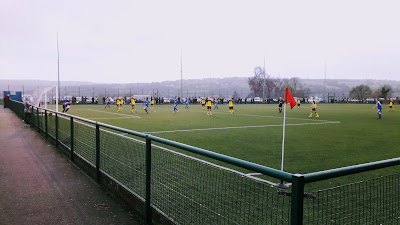 Ynysddu had beaten higher ranked opposition in the form of Croesyceilog, Taffs Well and Monmouth Town to reach the third round but today was just a step too far.

After a dominant start, The Ancients took the lead after 10 minutes when Dean Rittenberg headed home a Naim Arsan cross. An Arsan cross-shot doubled Cefn Druids advantage after 32 minutes as the visitors were in complete and utter control of the game.

Despite being two goals behind though, Ynysddu were still in the tie and when Jamie Russell bundled home after 53 minutes to half the deficit, it was game on. Druids were still the more potent attackers but at least Ynysddu were now getting out of their own half.

Unfortunately for the hosts a red card for Lewis Barnett after 83 minutes extinguished any hopes of a comeback and, as the game entered its final stages, Jordan Evans smashed an effort against the crossbar before he finally scored the Druids third with a heavily deflected free-kick in the final moments.

It was not to be for Ynysddu this afternoon but they certainly did themselves and the Gwent County League proud. Uppaddu's!! 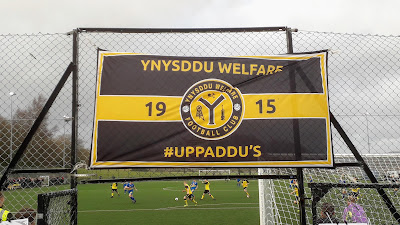 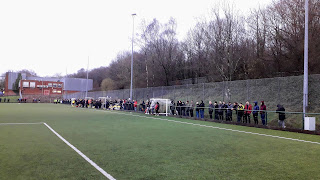 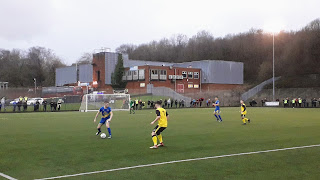 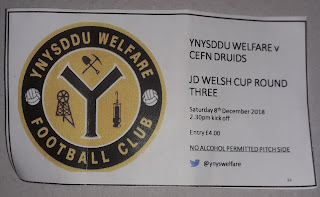 "Damage in the Box"

For the archive of older entries, please click here...